Fort Bend County Water Control and Improvement District No. 3 (FBCWCID 3, WCID 3), through the dedication of its Directors and Consultants, is committed to providing the highest quality services at the most economical costs to its customers and taxpayers.

Through FBCWCID No. 3’s website you can easily find links to the following services:

The table below shows the historical data for the GRP fees charged by various jurisdictions in Fort Bend County. Each district sets the rates every year. The City of Richmond has been adjusting the rate every two years. WCID #3 joined the City of Richmond Groundwater Reduction Program in 2015. Joining an existing program allows WCID #3 to provide water services to the community without being financially penalized for not participating in a program. 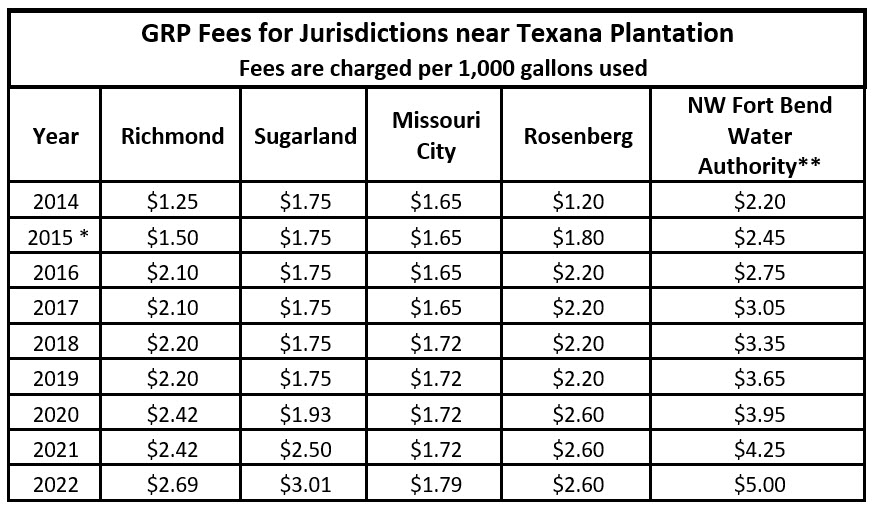 We have had several residents inquire about the City of Richmond’s GRP line item on their water bill. Since it has been several years since the information notice was sent to everyone in the district, we would like to remind everyone of Groundwater Reduction Program (GRP) and why it’s a line item on your water bill.

The Fort Bend Subsidence District was created by the Texas Legislature in 1989 as a conservation and reclamation district (Act of May 26, 1989, 71st Leg., R.S., ch. 1045, 1989 Tex. Gen. Laws 4251). The District’s purpose is to provide for the regulation of the withdrawal of groundwater within the District to prevent subsidence that contributes to flooding, inundation or overflow of areas within the District, including rising waters resulting from storms or hurricanes, The District’s boundaries are defined as all the territory within Fort Bend County. Requirements of the Fort Bend County Subsidence District to convert thirty-percent (30%) of groundwater usage to an alternate source by 2016, and sixty-percent (60%) to an alternate source by 2025. Because Texana Plantation does not have the ability to build a Surface Water Conversion plant, (the community relies totally on groundwater pumped from two wells) the WCID #3 had to join a Ground Water Reduction Plan (GRP) to adhere to the mandates put forth by The Fort Bend Subsidence District. After much research and price comparisons, WCID #3 voted to join the City of Richmond’s Ground Water Reduction Plan. By joining this group, it allows Texana Plantation to be part of a group that is following the guidelines of reducing groundwater pumpage, while still utilizing our wells for our water supply, to not comply with the Subsidence District, WCID #3 would have incurred steep disincentive fees. Under the terms of the Agreement, the City will instead assess the annual pro-rata share of costs to the participants in the form of a per gallon pumpage fee. The fee is currently $ 2.69 per each 1,000 gallons pumped by the District. The District strives to keep its water rates as low as possible. You will now see a separate line item on your monthly water bill for the “City of Richmond GRP Fee,” and will be assessed the $2.69 per 1,000 gallons pumpage fee. This includes a ten percent increase in the fee to account for lost water and other related expenses. If the District’s annual cost increases or decreases for 2022-2023, such increase or decrease will be reflected in the monthly fee. If you have any questions regarding the information in this Notice, please feel free to contact the District’s Operator, Municipal Operations & Consulting, Inc., at 281-367-5511. You are also always welcome to attend any meeting of the Board of Directors of the District, normally held on the third Friday of each month at Ramble Creek – 7930 W. Grand Parkway, Suite 100, Richmond, Texas, beginning at 11:30 a.m. Consult the district’s website Fort Bend County Water Control and Improvement District No. 3 (fbcwcid3.com) to see if the meeting dates, times or locations have changed. Also, please feel free to contact any of the board members – Ann Heil, Craig Johnson, Kreig Smith, Gloria Couch and Andrew Wilde.

The District recently completed two projects in the district.

During the heavy rainfall during Hurricane Harvey the water level in Lake 6 increased to a level where the water began spilling over the top of the dam located next to Jones Creek. After applying to FEMA the district was awarded funds to make the repairs. Plans were prepared by the district’s engineering firm and submitted to FEMA for approval. Once the plans were approved the district requested bids from contractors. The work was completed in 2022.

The ditch on the west side of Texana Way from Sandy Point to Lavaca Lane had been identified during intervals of high rainfall as a deterrent to efficient removal of the rainwater to the main drainage ditch in the district. The problem was confirmed when the ditches along Texana Way and Sandy Point were surveyed. Both ditches were recognized as having issues with efficiently removing rainwater. Bids were submitted for both ditches but the district did not have sufficient funds to perform both streets without jeopardizing the reserve funds for the district. Texana Way was identified as the ditch in the most need so the work was put out for bid. The work on the ditch was completed during 2022.

There are advantages for using Chloramine as a disinfectant over Chlorine.

Issues to consider after Conversion to Chloramine

A backup Generator was installed at Plant 1 and performs well when the electrical power is interrupted to the district. A backup generator is being planned at Plant 2 to have complete backup for the district in the event there is a mechanical issue at Plant 1 during a loss of power. This will keep the water system working uninterrupted.

The Water Well at Plant 1 has experienced some failures over the years and the repairs to the well have required reducing the size of the piping in the well. This has reduced the well output to only 50-60% of the well at Plant 2. Should Plant 2 go down during months of high water usage the well at Plant is insufficient to provide the needs of the district. Drilling a new well will bring both wells to similar outputs and each well could individually provide the districts needs should one plant be down.

Lakes 1, 4 and 5 will be drained, sediment and sufficient lake bottom removed and then have clay hauled that have properties that are selected to prevent the loss of water through the lake bottoms. (Issues regarding this can be found in other documents already provided). Work will be put out for bid and work will be done based on the most economical method for selected contractor. The work should be similar to the recent work performed on Lake 2 done by the Texana Plantation HOA. The water requirements to maintain the water level in this lake has reduced since the work was done.

For persons with questions or needing help regarding website accessibility, or to request the provided information in alternative formats, please call (713) 850-9000 x226.